The Delta 7 France Foundation, within the framework of PAP 14, drew inspiration from call centres already established in the Nordic countries, it set up its first centre in Rueil Malmaison in 1975, then the second in Poitiers in October 1975, Le Blanc being the fourth in France and the first in the Centre region. The founders were generally the social work centres.
Originally, in a vast programme concerning the elderly, it was «about maintaining life, breaking moral loneliness, increasing security» and to have a home telephone and be connected to a neighbourhood or a permanent central call station.

The association Delta Revie Indre was created in 1976 in Le Blanc then years later in Argenton, Saint- Gaultier, Bélâbre, Tournon and Aigurzon.
The purpose being to break the isolation  of isolated  elderly people by installing a telephone line and by proposing a  SOS friendship.
From 1981 Delta Revie equipped there members with an alarm system connected to a call centre to reinforce their security.
This call centre was managed in partnership with the hospital au Blanc.

In 1995, a union of these associations was organised to simplify administrative procedures, by sharing the equipment and co managing the call centre.
In 1997 the hospital au Blanc automated its switch board and refused to manage the calls of Delta Revie.
This was now provided by the company Sedeca.
The association since the beginning has functioned with volunteers and been supported by The Rotary Club and The Lions Club, it is only since 2001 that the association employs employees.

This union of associations merged in 2014 to become a sectored association.
The local associations  did not disappear, they became local sections of Delta Revie Indre (except Delta Revie Saint -Gaultier).
Call management has been ensured since 2017 by employees of Delta-Revie Indre and Cassiopea in Périgueux 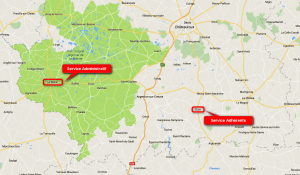